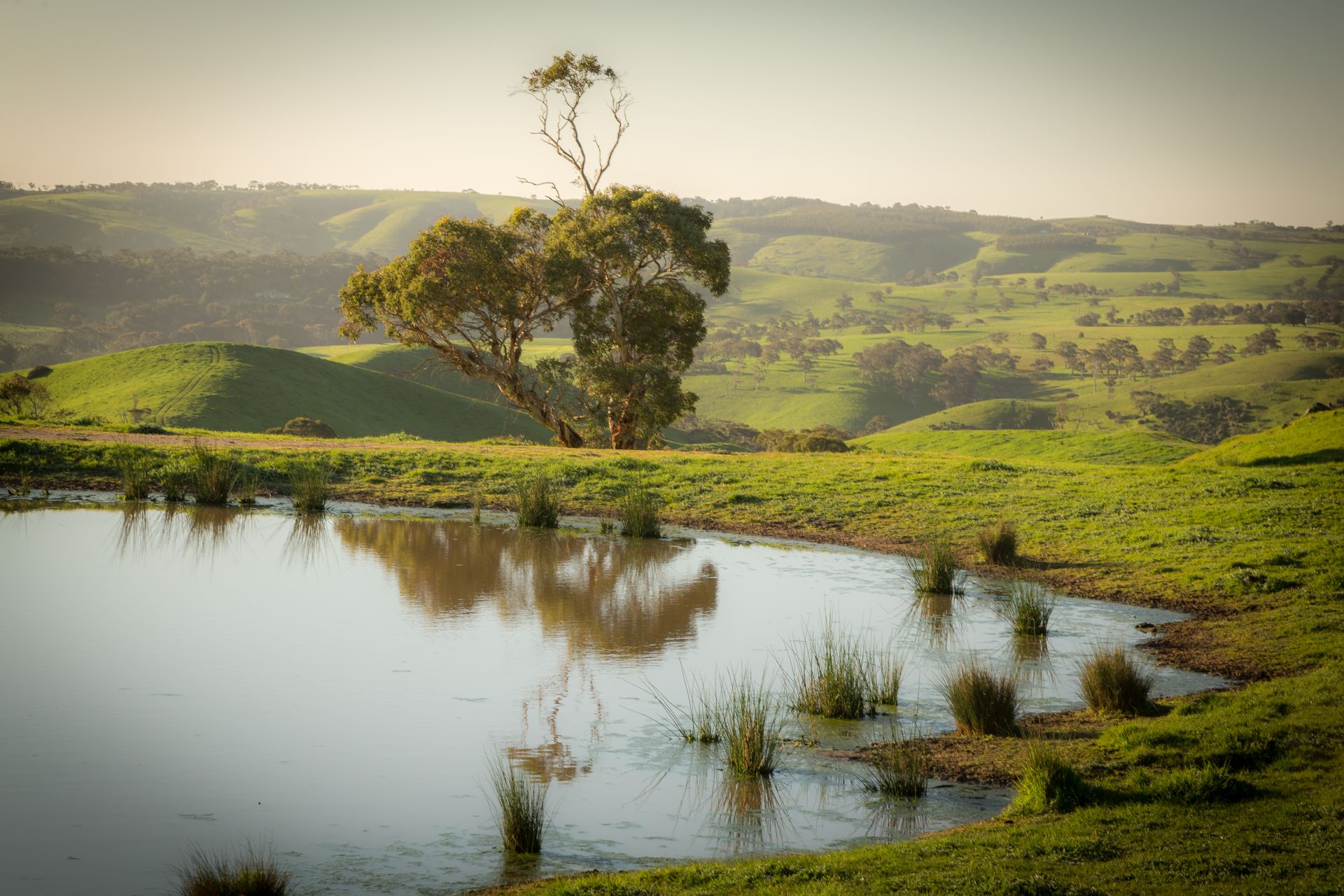 Creation of 'Temporary' Green Space in the Centre of Normanville

The new green space in the centre of Normanville is set to open for the October long weekend.

The public amenities are now open and have been renovated with pride by our depot team members, including our own electrician, plumber, and tiler.

The green space is a short-term solution for the site. The community will be consulted on the long-term future use of the site.

We have now completed the remediation work necessary including demolishing the building, removing fuel tanks, soil testing and flattening the old Normanville Service Station site ready to be turned into a temporary green space for the community to use.

During this process approximately 500 tonnes of ‘Premium Blend Loam’ from Peat's Soils was brought into provide a base for the new turf that will be laid. This means we have, through our waste providers Fleurieu Regional Waste Authority (FRWA), sent our green organics to Peat’s Soils, seen it being broken down and formed into a high-grade soil additive and now we will be using it on our own site. This really demonstrates that 360-degree waste to recycling program that we have committed to in our War on Waste.

Our Depot team are currently installing irrigation and lighting, along with onsite electricity points and are ready to lay the turf in early September 2020.

Once the turf is settled in position and ready for foot traffic the temporary fencing will be taken down and the community will be encouraged to make use of the area which could include events such as community markets.

The temporary green space is a short-term solution to ensure that the now unoccupied site can be immediately used and not become a vacant piece of land in the Normanville town centre.

We commenced engagement with the community through the 2030 Strategic Planning process on the future of the site and will perform future targeted consultation to determine a long-term future for the site. The consultation is likely to commence next financial year to allow the community to get used to the vacant site while Council’s focus is on other funded strategic projects.

Council has now completed the remediation work necessary including filling and compacting the tank holes and flattened the site.

The next step of the project includes delivery of 500 tonne of ‘Premium Blend Loam’ from Peat's soils, to provide a base for the new turf that will be laid. This means we have, through FRWA sent our green organics to Peat’s Soils, seen it being broken down and formed into a high-grade soil additive and now we will be using it on our own site. This really demonstrates that 360-degree waste to recycling program that Council have committed to in their war on waste.

Temporary fencing will remain in place until the turf is laid in spring. The site will be turned into a green space until the community is consulted about the long-term future of the site.

Council has also commenced renovating the existing toilet block at the back of the site. The job is being done in-house using our skilled depot team members, including our own plumber, electrician and tiler to complete the renovation.

This report is centered on the soil condition of the site of the former Normanville Service Station. All site structures and associated hardstand areas had been subsequently removed by De Young’s, who are a certified demolition and removal company, prior to the start of this investigation.

The District Council of Yankalilla (DCY) recently engaged TMK Consulting Engineers (TMK) to carry out a second phase of soil testing in order to validate the in-situ soil post the removal of five (5) Under Soil Tanks (USTs), thereby classifying the site generated stockpiles prior to the excavated pits being backfilled. With the excavated UST pits being validated, the removed (stockpiled) soil was classified in accordance to SA EPA’s guidelines.

As part of a full site preliminary investigation, test pit sampling across the site was also carried out with eight (8) test pits being utilised so that grid based soil sampling could be carried out across the whole site. All site activities were carried out within the work zone at 81 – 83 Andrew Avenue, Normanville, South Australia.

To make sure we captured everything, all soil testing was carried out on-site prior to the removal of the site’s infrastructure which included the service station and associated hardstand areas.

This validation testing consisted of testing the walls and floor from all locations where the five (5) USTs were removed. Excavation of the tanks was carried out over a two day period, which was completed on the 25th and 26th of May 2020. The subsequent stockpile and test pit areas were sampled on the 1st and 3rd of June 2020.

Further site investigation of soils consisted of sampling at eight gridded test locations at across the site through the use of shallow dug test pits.

Across the entire site, soil testing consisted of collecting samples from the excavation areas that were generated through the removal of the five (5) USTs which yielded the collection of forty-one (41) primary validation samples. The generation of associated stockpiles, (from the UST removal), yielded sixty-nine (69) primary soil samples while the grid based test pits that were established across the site yielded sixty (60) primary soil samples.

The Validation sampling generated three locations (D002, D003 and D004 on diagram provided) that were above the Australian Standards (NEPM 2013) management limits, these areas were identified we, DCY, stated that we would further excavate these areas to explore any further Low Level Contaminated Waste (LLCW). It is worth noting that no floor (base) of any UST validation investigation returned a reportable value therefore deeper excavations are not warranted.

While six (6) stockpiles were generated (listed as Stockpiles A through F on the diagram) only three of these stockpiles are required to leave site. Two (2) of the stockpiles (stockpiles B and E) were required to be removed from site as Low Level Contaminated Waste due to the greater than C9 fraction of Total Recoverable Hydrocarbons (TRH).

Stockpile “F” returned soil chemical results that were within SA EPA Waste Fill guidelines but due to the source of material can only be used in a commercial setting that would not require vegetative usage. Stockpile F was therefore removed from site due to accepted ASC NEPM ecological Screening levels being exceeded for the F2 and F3 organic fractions.

The Grid based test pits from across the site did generate one area (TP 105 on the diagram) that was above the F3 organic fraction for the accepted ASC NEPM (2013) ecological screening level. This area was identified by the Council and was excavated and removed off site along with Stockpile F material.

While no metal(loid) result from any of the testing resulted in a breach of the excepted ASC NEPM (2013) human health guidelines for a site that is proposed to be used as open space.

Based on site specific ecological investigation soil levels, copper, nickel and zinc are of interest. The current soil quality is poor on site which has led to low site specific protection levels for these three metals. It has been made clear to TMK by DCY that the site will require additional soil to reach finished levels, therefore it was critical that this soil brought to site is fit for purpose and is suitable to sustain vegetative growth.

Independent of this, Council will ensure that vegetation that is selected for this site is not sensitive to copper, nickel or zinc since this foundation soil will remain onsite and would be able to be reached by deeper rooting plants.

TMK acknowledge that the USTs from this site have been removed from site and have been disposed of off-site and copies of the disposal paperwork are included in the TMK document.

TMK note that no inclusions that suggested asbestos (ACM) was present during this investigation.

The attached report and investigation was conducted following both the ASC NEPM (2013) Schedule guidelines and SA EPA Soil Classification Regulations. If the Council or others wish to utilise this site for a more sensitive land use than the proposed open space additional site investigations would be required.

Data generated for this site does not demonstrate an actual or potential harm to groundwater (water), that is not trivial, and therefore TMK is not submitting a Section 83A notification for this site as outlined by the SA EPA.

We are pleased that 81-83 Andrew Avenue has now been fully cleared and the demolition company were able to recycle a large amount of material. The underground tanks were removed and disposed of by Adelaide Fuel Distributors under the direction of the Environment Protection Authority.

The good news is the tanks came out dry and in good condition. Soils samples were sent off to Melbourne for independent testing and the results have come back better than expected. Approval has now been given to complete the remediation of the site and refill the holes which will be completed in July. Council has worked with the Environment Protection Authority to ensure due process was followed during this project.

Temporary fencing will remain in place until the turf is laid in spring. The site will be turned in to a green space until the community is consulted about the long-term future of the site. Exciting changes have now commenced in the centre of Normanville with the creation of a temporary green space on the site previously known as the Normanville Township Petrol Station at 81-83 Andrew Avenue, Normanville.  The site was purchased by Council in January 2019.

The Normanville Township Petrol Station site ceased selling fuel in December 2019 and operated as ‘Fleurieu Fishing and Outdoors’ until the doors were closed at the site at end of February 2020.

Council has been working with surrounding businesses on the timetable to create the temporary green space. Now that all buildings have been removed you may be able to visualise the space better. The final piece of the infrastructure removal, the  underground tanks, are due to be extracted the week commencing 25 May 2020.

The Council Team will then repurpose the site into a useable temporary green field site filled with irrigated turf.  A concept photo of the end result is displayed below.

The temporary green field site is a short-term solution to ensure that the now unoccupied site can be immediately used and not become a vacant piece of land in the Normanville town centre. Council will continue to engage with the community through the 2030 Strategic Planning Process and future targeted consultation to determine a long-term future for the site.

The turf will be installed in Spring 2020 and, once settled in position and ready for foot traffic the temporary fencing will then be taken down. Once the fencing is removed the community will be encouraged to make use of the area which could include events such as community markets.